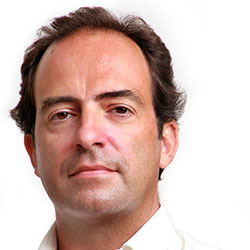 Nuno Arantes-Oliveira was trained as a scientist and has worked mostly as an executive and entrepreneur in healthcare and the life sciences.

Nuno was the founding CEO of ATGC Portugal, which became a leading tech-transfer company in the Country; of Alfama, Inc., a drug development company voted best start-up in Europe in 2005 and recently acquired by Proterris, Inc. of Boston; and of Coimbra Genomics S.A., named Europe’s second biggest promise in e-Health in 2015. Nuno was President of P-BIO – Portugal’s Biotechnology Industry Organisation (2011-2015) and sat on the board of Health Cluster Portugal (2008-2013).

Nuno’s current holdings and interests include Oceano Fresco, a pioneer shellfish aquaculture startup where he is a founding Board member, the oncology focused VC fund Alcea Advisors (Paris), where he is a venture partner, and a state-of-the-art pediatric specialties clinic in the center of Lisbon. He has also had multiple other board, advisory and expert roles in the US and in several European countries, including with Government authorities and top-tier research organisations.

Currently Nuno is an invited assistant professor of the MIT-Portugal Program based in Instituto Superior Técnico (IST), where he lectures graduate classes on innovation and technological change. Nuno obtained his PhD in Genetics with pioneer work on the molecular basis of aging and lifespan regulation, performed at the University of California San Francisco (UCSF) and published in high-impact scientific journals.